Too Sad for Witty Titles

I was going to blog about how crappy the line has been lately, but there's bigger fish to fry tonight.

Today we found out that my husband's best friend from Parral, Chihuahua was murdered on Wednesday. They grew up together in the same colonia and he was like a part of the family. His parents didn't tell us until today because they knew Gordo would be so upset and would go to Parral for the funeral, which would surely end in him losing his job at the maquila. We don't really know who did it or why but don't doubt that he was involved in some type of criminal activity in some way or another. Angel was a wonderful man. He lived with my husband and I in Arizona years ago so I had a lot of time to get to know him. He was goofy and witty and loving and always had a smile on his face. He went back to Mexico a couple of years ago when his older brother was murdered. We just spoke to him on Sunday as he had plans to move to Juarez in the coming week to look for work. He was only 27 years old, with a whole life ahead of him. So why would someone like that turn to a life of crime?

It's simple to me yet so vague to a large portion of America. When you live in poverty and see the neighborhood gangsters who live in mansions driving Tahoes on 22s with brand new boots while you struggle to put beans and tortillas on the table and shower with a bucket of cold water, the decision seems pretty obvious. It is the same dilema we see in American ghettos only magnified times a million. In so many areas of Mexico there are only 2 options to better your life. You can jump the border, or you can stick it out and join the dark side. A teenager taking a 3 month trip alone in the mountains to work in the marijuana fields is a common place in many parts. It's quite a stark contrast to an American teen sneaking off to smoke a joint behind their parents back.

And that's where it gets me... This is really, really messed up. Drugs are bad enough on their own, but when you know (and I mean really know) what it takes to get that ounce, that eight ball, etc? That's fucked up. I have an extremely colored past and did mine, yours, and the kid down the street's fair share of drugs. I've been sober for over 5 years now, but that doesn't take away the guilt I feel now that I know what was involved, the blood that was shed, for me to get high. It's disgusting really.

The part that hurts me the most is the US's view of Latin America. "It's all their fault" and South of the border is just a cesspool of low-lifes, overflowing onto "our" land, etc? Oh wait, I'm sorry, that's with the exception of Cancun of course! Americans love to talk crap about Mexico but can't wait to go vacation here. Spring Break! Margaritas! Souvenirs! Woot, woot!? It makes me sick. Doesn't everyone realize that these people are only giving America what it asked for? Just feeding their addictions? I mean, I don't get it... I don't get how more people don't get it. America has made their bed. America funds this war. An American gun put 2 bullets in Angel's chest and one in his head. American money put that .380 in the hands of his murderer.

I maintain my feelings that I am safe here in Juarez, but I am safe because I am not involved with drugs and crime. I am safe because I can be. I can cross the border and bring home a comfy US salary. If I wasn't doing that, and my husband was here in Mexico alone, what would his options be? He works in a maquila, like millions of other Mexicans, and brings home 2,000 pesos a month. Our rent alone is 2,500 pesos. Enough said. It's no wonder people come to the Unites States illegally or get involved in drug trafficking or human smuggling. I guess the question is how far would you go to buy diapers for your infant? How far would you go to feed your children? How far would you go to stay alive if you had no other options? The answer is all the way.

Do I have a solution? No. Do I know how to heal my husband's broken heart? No. Do I know what to say to the mother who has lost yet another one of her son's lives to give some spoiled brat a bump of cocaine? No. I don't know what to do or say or think. I can just listen to my husband and be sad with him and go on with life.

Tonight we will remember how much we loved our friend, pray that he is in a better place, and hope that someday soon we can find a way to make this world a better, and more peaceful place. 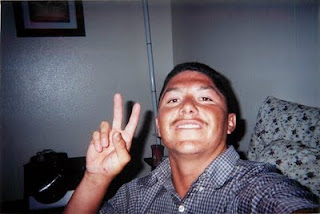 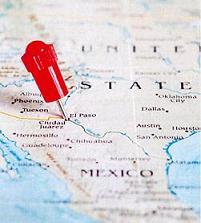